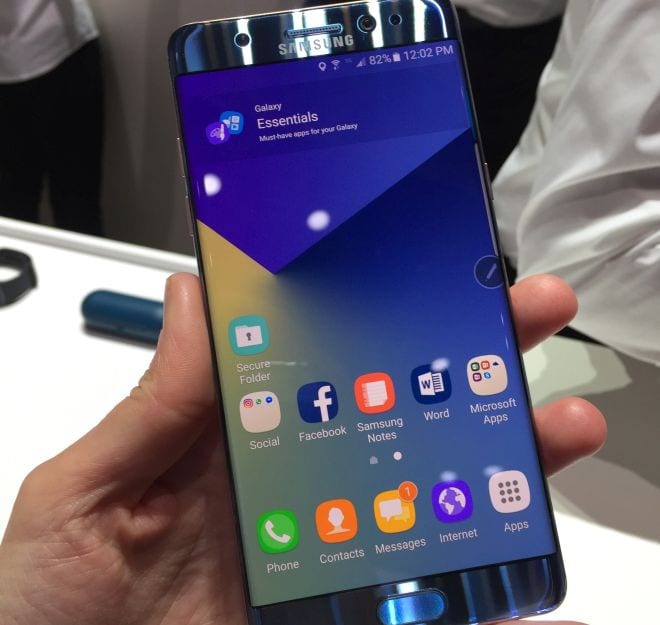 Aviation authorities and airlines from North America to Europe and Asia have issued bans or guidance on the Samsung Galaxy Note 7. On Thursday, September 8th, the U.S. Federal Aviation Administration said travelers should not use or charge them while in the air, or stow them in checked luggage.  This has prompted many airlines to start telling passengers at the gate and on board the aircraft to keep the phones switched off until they disembark from the aircraft.

Last week, Samsung ordered a global recall of the jumbo phones after its investigation of explosion reports found the rechargeable lithium batteries were at fault.

Rechargeable lithium batteries are more susceptible to overheating than other types of batteries if they are exposed to high temperatures, are damaged or have manufacturing flaws. Once the overheating starts, it can lead to “thermal runaway” in which temperatures continue escalating to very high levels. Water can put out the flames, but doesn’t always halt the thermal runaway. Flames will often reappear after initially being quenched.

Earlier this year, the International Civil Aviation Organization, a U.N. agency that sets global aviation safety standards, banned bulk shipments of rechargeable lithium-ion batteries as cargo on passenger planes until better packaging can be developed to prevent a fire from spreading and potentially destroying the plane.

Updated Sept. 10: In response to our recent announcement regarding battery cell issues with the Galaxy Note7, we are advising that you power down your Note7 and exchange it now, as part of our U.S. Product Exchange Program for all Galaxy Note7 owners. We strongly advise all customers to use this exchange program because your safety is our top priority. Additional sales and shipments of the affected devices have been stopped, but if you already have a Galaxy Note7, we strongly advise that you replace it.
Through the U.S. Note7 Exchange Program, you can:
1.  Exchange your current Galaxy Note7 device with a new Galaxy Note7 (pending CPSC approval). Select carrier and retail outlets will provide customers, who prefer a replacement Note7, an exchange for a Samsung J Series or equivalent device to use until CPSC-approved Note7s are available.
2.  Exchange your current Galaxy Note7 for a Galaxy S7 or Galaxy S7 edge and replacement of any Note7 specific accessories with a refund of the price difference between devices.
We know this exchange is an inconvenience, so you will also receive a $25 gift card, in-store credit or bill credit from select carrier retail outlets when participating in the U.S. Note7 Exchange Program.